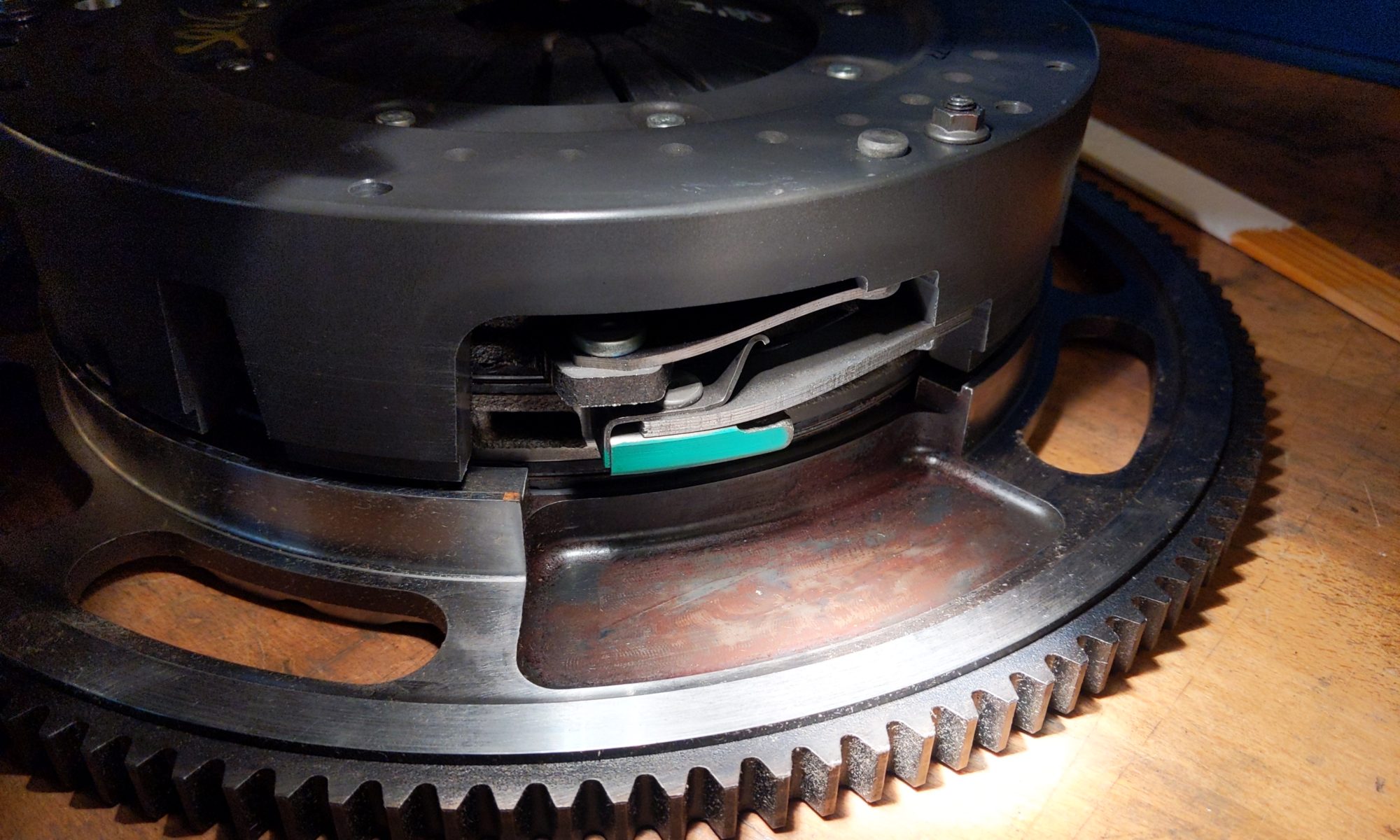 These are the steps I took to install the AMR Clutch on my 2009 ASM.

—Jack up the Car—

2. Open the hood and add towels to protect the fender.

3. Remove the driver side angled brace.

4. Remove 3X hoses from the coolant reservoir. Place plastic film over the opening and wrap with 3M electrical tape to hold in place (you do not want the tape gum to contact the coolant).

5. Remove the electrical connector from the bottom of the coolant tank (I had the wheel arch removed so that single step was somewhat easier-otherwise, don’t remove the wheel arch).

7. You do not need to loosen the nut on the hydramount and raise the engine as per the step in the AM workshop manual.

8. Remove the front 7 nuts from above. You will need a swivel and deep well socket (13mm I think).

9. Remove the last Nut from below.

10. Remove the manifold from below.

11. Lower the engine back down (if you raised it).

13. Remove the cross brace on the rear.

14. Loosen the strap clamps holding the cats to the center exhaust.

15. Remove the 4X spring/bolts at the muffler.

18. Remove the cats (I already had these removed previously so the nuts came off easily).

22. Mark the drive shaft to axle flange for registration at assembly. Remove the 6X SHCS’s on each side.

23. Disconnect oil cooler connections and catch the oil. Cover using plastic film and 3M tape as was done for the coolant lines.

26. Remove the 2X bolts holding the ASM reservoir and allow it to hang.

27. Put a heavy duty ratchet strap to suspend the transmission from the rear frame. This will need to be on the balancing point of the transmission which is about 4″ forward of the differential.

28. Raise the transmission with the strap ratchet (my strap routing caused this to be a problem so I used a jack).

29. Remove the ground bolt on passenger side transmission mount.

30. Remove the 4X transmission mount bolts on each side of the transmission (These have thread locker so it takes forever to get them off (an air tool would be great here).

31. Remove the intake clamp at the throttle body (it will come off when the engine is lowered).

33. Remove the connector and ground from the ASM pump.

34. Remove the connectors for the ASM valves (you do not need to mark these).

36. Remove the ASM clutch line. This connection is released in the same way a pneumatic tools is removed from the air line.

38. Use the forked door panel removal tool to remove the 2X tie downs.

40. Pull the ASM valve connectors between the transmission and accumulator 1 connector at a time until they are all free.

42. Put a jack under the torque tube. Very little force will be on the jack. This could be skipped.

43. Remove the 8X bolts holding the transmission to the torque tube.

45. Use a stiff scraper in the gap and pry the transmission away.

46. Before the splined shaft comes completely out of the drive shaft, get ready to balance the transmission on the strap. This will not be hard if you get the balancing point right.

47. Lower the transmission using the strap ratchet onto 2X lengths of 2×4’s about 8″ long ea. Make sure you do not lower it onto the ASM pump.

49. Remove the larger circlip from the rear of the torque tube.

51. Now for the fun part: Remove the 16X bolts holding the torque tube to the engine. I used a Snapon 6 point swivel socket which allows more room than a swivel and socket. The 6 point also does not damage the bolts as easily as a 16 point socket. I had a lot of extensions plus an extension/screw driver handle. I also had a long handled Snapon ratchet which was nice. The upper bolts are hard to access and crack loud when free which sound like my ratchet teeth shearing away. The bolt above the bleed bracket is long.

53. Remove the 19mm bolts holding the flywheel on and remove the fly wheel.

54. I used paper towels soaked in grease. I turned an aluminum rod to 0.746″ which is the same dia. as the drive shaft. Then used a 5lb hammer to drive the paper towels into the hole. I later repeated the same using water which is much easier and less messy. Be careful not to hit the freeze plug.

3. Clutch Compression Tool – There are 3X M6-1.0 holes spaced 7.842″ apart (320 O.C.). You need to compress the fingers about 1/2″. I made a bar that went across 2 holes and a forked piece for the 3rd. The forks went under the bar. Then a ring under the fork. I put a light coat of oil on the threads of the M6 screws which ere 60mm long. Used washers and spacers to allow equal thread engagement. Note: The SHCS’s in the AMR flywheel are 1/4-28 for some reason.

4. Remove the PLCD sensor from the new slave I bought on eBay and install on the new. Could probably use the old one but I just wanted to be sure. The sensor is made by Tyco. Here’s the drawing: PLCD.pdf

5. Compare the resistance of the old sensor to the new at 39.7 Ohms and 69.6 Ohms. Check that the magnet causes a voltage fluctuation of a few mV.

6. Install the slave and spacer onto the torque tube.

8. Get a squeeze bottle to fill the ASM reservoir. The paper behind the can has the drawing I use for finding a missing line clip. Anything I loose, I just draw on the paper and my wife can find it.

9. I put a new shaft sensor in since it was only $18. I also used the same aluminum skinned tar based patch to cover the holes. I should have researched a better material (Probably VHB 4950 with foil on one side but just used the same tar based tape (might help with noise since the bell housing could act as a sound board). Note: If the release bearing donut is off-center, don’t worry about it. It will self-center when you start the car.

10. Make a remote ASM pump cutout switch to plug into the relay socket.

1. Pilot Bearing – Press the new pilot bearing using the tool as a stop. If you do not use the stop, you can easily damage the bearing because the bore in the crank is too large to serve as a stop and simply wedges the bearing if driven too far. The pilot should be 0.180 from the counter bore.

3. Check that the starter pinion engages with the flywheel ok. I watched a video of 2 guys replacing a clutch and put it all together and the starter would not engage (had to pull the trans again) so I felt better to check this.

4. Compress the clutch using the compression tool. I used some scrap aluminum and drilled holes for the 3X M6-1.0 x 80 SHCS’s. The Delrin centering tool is in position. The screws that came with the clutch are 1/4-28 x 2.5″ for some reason.

6. Install the torque tube with about 6 or 8 of the easy access bolts in the bell housing.

7. Put a light film of moly grease on the splines of the drive shaft.

8. Position drive shaft into the torque tube. Use a 1″ wood or aluminum rod in the transmission end to get leverage to lift the front end into the clutch. Drive in lightly with a mallet until the Cir-clip can be installed.

9. Install the remaining bolt on the bell housing. Don’t forget the 2X brackets for the front heat shield. Torque to 37 ft-lbs. I used a about 30″ worth of extensions and a wobble 13mm on the end. Used spray adhesive applied to the wobble to prevent gravitized movement. The made in China “Flexible Claw Pick Up Grabber” is great to hold the upper bolts. The highest 2X bolts are easier to install because the angle for the wobble is nearly straight.

11. Install the pump and solenoid connections.

14. Clean the mating surfaces of the header and head.

16. Attach the hoses to the coolant reservoir and attach with 10mm nut and 10mm screw.

—Top Off the Transmission Oil—

19. Use a 22mm socket to remove the filler plug on the transmission and fill with Castrol BOT-270A to replace what was lost when the transmission cooler was removed. This is easier now than when you put the exhaust on.

21. Install the middle heat shield and tighten to 23Nm.

23. Position the Center Pipe Assy. And insert the spring bolts a couple turns.

24. Install a couple Torx screws to hold the exhaust pipe to the front mount.

25. Install the front 02 on the passenger cat and install with gasket so it’s still hanging a little.

28. Tighten the cat nuts with open end 13mm on bottom and socket/extension on top.

33. Attach a hose to the clutch bleeder nipple and feed into an empty container. Loosen the bleeder.

34. Use the Foxwell NT-530 to activate the ASM pump. OR, Make a relay socket with a remote switch to activate it remotely. When the air bubbles no longer persist, tighten the nipple.

35. Take the car to someone that has the AMDS to reset the Clutch Wear Index and properly bleed the clutch. I took my car to Praveen and Robbie at Peninsula European Car Service where they do excellent work. You can bleed the clutch a little better by changing gears with the car is running during the process before performing the bleed via the AMDS. The AMDS is also good because you can get the latest firmware updates.

36. Check the duty cycle of the ASM pump. Ideally, when you first start the car and it’s in Neutral, the cycle time will be over a minute. My car was initially 45 seconds but this improved after the AMDS bleed. You should get almost 3 shifts when the pressure is at about 55 bar and then drops to about 40 and then the pump runs again. I used the Foxwell but you may be able to hear it or rig up some sort of indicator. Many thanks to Simon at SS AutoTech for valuable info on the technical details of the ASM operation.

37. Note: Initially, I was a little concerned that the Clutch slave tuning by the AMDS might have a small tolerance for upsetting any possible servo settings, go into oscillation and blow the seal on the slave. But thinking this thru, there are a lot of variables which prevent having a really tight servo control such as temperature, aging and air in the hydraulic lines.

39. After the clutch upgrade, the shifts are nice and smooth up to about 3500 RPM where it begins shifting faster until the 5500 RPM where hypershift occurs. Driving in traffic and starting on hills are ok too. Haven’t tried backing up on an incline but I’m sure that’ll still be a problem-especially when simultaneously turning.